Challenge
The current industry standard dynamic mechanical load (DML) test protocols for solar photovoltaic (PV) modules do not subject modules to the types of pressure fluctuations that occur in real-world scenarios. These protocols load the modules with uniform pressure, either with a long duration static test or unrealistically slow variable loads. Although the draft International Electrotechnical Committee (IEC) standard 62782 describes a dynamic loading test, the load is varied slowly and in one direction, with cycles up and down over one to three times per minute for 1,000 cycles.

In reality, wind pressures across the PV modules change dramatically over much shorter time periods. Not only does the magnitude of the uplift change rapidly, but the center of uplift moves from the top edge of the module down past the module center. Average loads across the modules are shown by the green line, but there are local concentrated loads well in excess of those shown in the plot. 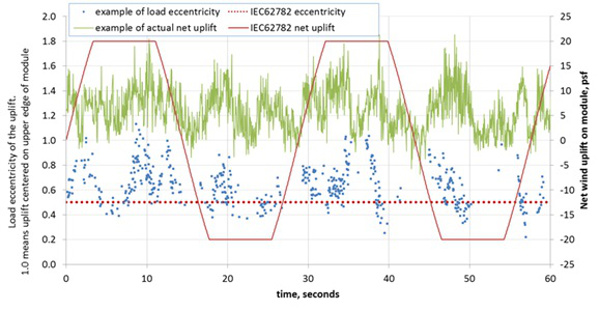 A draft Recommended Practice is particularly important at this time, due to industry trends toward using thinner glass and less rigid frames, which could result in cell or module damage due to wind loading. In addition, the dynamic response of common racking systems has an impact on the dynamic loads that the PV modules are subjected to.

Approach
Preliminary test results were presented at Solar Power International (SPI) in September, 2017. The testing involved subjecting a PV module to cyclic motion at its resonant frequency of 9 Hz for 185,000 cycles. Electroluminescent (EL) testing conducted before and after the cyclic loading did not reveal any damage, however the testing was preliminary and it is still believed that cyclic loading has the potential to damage PV modules. Based on this belief, a more rigorous methodology for evaluating this risk has been developed as a draft Recommended Practice for assessing PV modules’ resistance to dynamic loads.

Benefits
Typical PV module warrantees and installation manuals currently do not have restrictions on the dynamic properties of racking systems. However, it is strongly believe that some racking systems could damage modules when the racks deflect or vibrate. Improved testing methods will protect module manufacturers from warranty claims, and help stakeholders avoid warranty claims by ensuring modules are not damaged by racking systems.

In addition, module manufacturers will benefit from improved test methods when incorporating design changes into their product. Reduced glass thickness and frame rigidity could leave modules more prone to damage due to dynamic loading, but since this is not currently captured in industry standard tests, this risk is currently not screened by manufacturers.