We spoke to Clive Turton, President & CEO, Asia Pacific at Vestas about changing political and public perception, the value of digitalization and the challenge of COVID-19:

Clive Turton: Rising population and economic growth will see South East Asia, India and China account for 75% of new energy growth over the next 10 to 15 years. Renewables can play a much larger role now in helping to meet the associated challenge of transitioning to lower-carbon energy systems to meet national commitments under the Paris Agreement. The technologies are available and are continually becoming more efficient and cost-effective. The key to a faster energy transition in Asia Pacific is to spread awareness and understanding of the benefits of renewables among senior political leaders and the public. Public opinion on the value of renewable energy is very important to governments and regulators.

I am often surprised by government ministers and senior regulators saying renewable energy is expensive compared with traditional fossil fuels, or difficult to integrate into a sophisticated electricity grid. These objections made sense in 1995, but not now. Voices such as the Global Wind Energy Council are working actively in Asia Pacific to explain the up-to-date case for renewables, but there is still far to go in many countries.

Vietnam stands out in having clear, well-structured policy on feed-in-tariffs (FIT). If your wind power project is on the list there and can be grid-connected, it can get a fixed FIT if construction is complete by October 2021. Among neighbouring countries, some lack clear policies, others have no policies, so are not seeing renewables grow as much or as quickly as they could. Changing political and public perceptions can unleash the full potential of a wind power industry that keeps delivering more energy-efficient and cost-effective technology, and operations optimized by increasingly smart use of data. As an example, instead of spending time and money on designing a new turbine for every project, Vestas is pursuing a modularization strategy in which we can design different modules for one turbine. If someone has a base model, they could specify a particular nacelle, blade or tower. Packages can vary for high-wind or, low-wind areas and different ambient temperatures. This versatility will become increasingly important in offering cost-effective options that work best in differing locations.

Data-driven energy analytics can accelerate integration of renewable energy into the modern grid. It can be valuable to know that a turbine can operate at maximum capacity when electricity prices are higher rather than, say, at 98% of the time throughout the year. We are working with Utopus Insights, Vestas’ Software-as-a-Service company, to enhance our use of data to offer customers predictive technology to better manage service and operation around dollars rather than kilowatts. There is scope in Asia Pacific for repowering, i.e. replacing or updating technologies of older wind farms to get more from existing developments. Some wind farms in Japan, Australia, New Zealand and India are nearly 20 years’ old. Through repowering, we can apply more efficient technologies, but with the added advantage of having two decades’ knowledge of sites and operations. In addition, Vestas aims to become carbon-neutral by 2040, and is also taking a circular economy approach to what we do. Our turbines are about 85% recyclable, and we aim to eliminate non-recyclable waste from the lifecycle of our products by 2040.

We are also considering hybrid power plant concepts combining two or three elements from solar power, wind power and battery energy storage. It is interesting to look at how we decarbonize the electricity industry in the value chain beyond generation. Powering vehicles with electricity rather than fossil fuels will develop substantially, and we are fascinated by what will happen in marine and air transport.

Vestas is intrigued by ‘power-to-X’ concepts; for example, powering electrolysis with renewable electricity to produce low or zero-carbon hydrogen for storage and / or onward transportation and distribution as compressed gas or as liquid hydrogen or low-carbon ammonia. We do not sell many wind turbines to hydrogen plants today, but we are watching this emerging story very closely. Places like the Gobi Desert and North West Australia have massive renewable resource, but no demand. We should explore what technologies would work well there with hydrogen.

During the COVID-19 lockdowns, governments let us keep operating and transporting people to sites to deliver needed energy. In my view, Vestas and other renewable energy players have shown we can deliver. I hope it leads to renewed focus on the industry as we emerge from the pandemic.

I am encouraged to see many governments, government agencies and big companies saying we should now look at accelerating infrastructure development to speed the uptake of renewables. 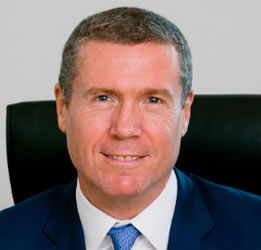 The key to a faster energy transition in Asia Pacific is to spread awareness and understanding of the benefits of renewables among senior political leaders and the public.
Clive Turton,